Pause and think about it!

Nearly thirty-five years ago, Ruth Hicks introduced herself to me at a conference. A discussion ensued and I found out she was a friend of Sharon Wilson and Nola Brunelle who were on staff at our school, New Life Christian Academy. Little by little, I drew out of her that she was not only an evangelist but also an accomplished musician—both in voice and piano. That fall, we welcomed her on our staff where she assisted the classroom supervisors, taught piano, and directed vocal ensembles for almost four years. Ruth was humble yet a tremendous encourager with deep spiritual roots and amazing biblical wisdom—a gifted lady. She loved her daughters and her grandchildren sacrificially with a godly fervor. For several years now, she has been singing in Heaven around the Throne.

One time Ruth was invited to go to California to speak. She had a train ticket, a box of crackers and peanut butter, and water–her only food all the way there. En route to the train station for her return trip to Michigan they asked her if she needed anything. She said she had to tell the truth: No she didn’t NEED anything. They had taken care of her lodging and meals while she was there. She had a return train ticket and leftover crackers and peanut butter. When she arrived home, she was rejoicing that she had been given the opportunity to share the gospel and that was recompense enough for her.

Ruth composed many original songs. On several occasions, she spontaneously wrote a song in response to my husband’s (Pastor Karl) message. I (Yvonne) have an audio of her singing several of these songs which I will try to get on youtube. So check back again later.

Click on her name for the lyrics to “Ordinary Person.”  Ruth Ariston Hicks

Click on her name for a note to Yvonne reflecting her positive spirit.  Ruth Hicks

Below: Ruth with her piano students, and with Kindergarten students in the 1980’s. 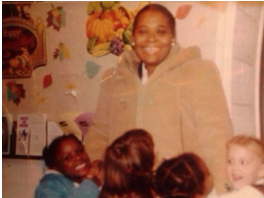 People dear to me