(As written by Yvonne for Wally Holz’s Celebration of Life service on Saturday, June 14, at 11am, Dodge Park Church of God, Sterling Heights, Michigan. Wally went home to be with Jesus suddenly on his birthday, June 8th, 2014. He was 71 years old.)

Good Morning. I am unable to be here today, but I was asked to make some comments about Wally. I am the wife of the late Julius Karl a cousin to Heidi, therefore a cousin to Wally. I am Yvonne Karl.

Wally and Heidi have been dear friends of mine for almost 50 years and are like brother and sister to me. I’m sure many of you feel the same way. We were like magnets to him and he made every one of us feel as special as the next one. We’ve been through a lot together, and there’s no end to the stories we could tell.

As most of you know, Wally was sensitive to the needs of people and found it difficult to say no when they needed help. He took Jesus’ words seriously and looked after the widows. I know, because I am one. At his request, I made a “Wally-do” list and each spring when he and Heidi came to visit, he asked for my list and went about completing each item and checking it off. Then he would say, “Is that all?”

Last March when they visited me at my home in Las Vegas, I had an injury and wasn’t able to walk far. Wally pushed me in a wheel chair so I could go with him and Heidi and Erika to see the sights. Because he had a little trouble hearing, he would stop the chair, step around in front of me, and get on one knee so he could talk and hear my response. At one point, Heidi snapped a picture. We laughed at the potential headline.

Wally also looked after orphans–like my daughter Caroline (and some of you here today).“In many ways,” she writes, “Onkel Wally took on fatherly responsibilities after my own dad died. When I bought my house, he taught me how to mow the lawn since I’d never used a mower before. He spent hours on the phone late at night talking me through the steps of installing a ceiling fan. He reassured me I wouldn’t electrocute myself if I followed his instructions exactly—he was right. He also gave great financial advice. He was a giving, sensitive, and jovial man who strove to be Christ-like in every area of his life.” I can sense many of you saying, “Yes. That was Wally!”

Wally’s integrity—his UNwillingness to lie; his determination to be honest—caused him to be slandered and persecuted; but God who knew his heart, saw him through and blessed him abundantly. With tears in his eyes, Wally talked about how good God had been to him. His heart was overwhelmed with love for Jesus and Jesus’ love for him.

He was so proud of his children, Heidi Lynn, Anita & Mike, and Richard & Helen—each one successful in life—but most important to him was that they continued to be disciples of Jesus Christ. When he spoke of his grandchildren, he unconsciously squared his shoulders and flashed a big smile. Obviously, his grandchildren were the best.

When he spoke of his wife, he beamed with love. After they retired, He still enjoyed getting dressed up and going out with her—whether to church, to a restaurant, or on a cruise. “Whatever you’d like, Heidi,” he was heard to say—and he meant it. She was the apple of his eye and he lavished her with gifts. Really, he spoiled her. I remember one Thanksgiving he had placed a very special gift in a place he thought she might find it easily and open it in the presence of the guests gathered for dinner. When she seemed not to notice it, he called me aside and gave me directions. I went to the gift and called to her: “Heidi, what is this?” She came quickly, saw it was for her, and nervously opened it while he stood back to enjoy her reaction. Some of you were there and remember that moment. He loved Heidi from the moment he met her and that love never waned.

When they came to visit me in Las Vegas, Wally never failed to have a Bible question for discussion. One of our many topics was death and dying. He had no fear of death and said He was ready to meet Jesus anytime but he wondered what it would be like. Well, now he knows! He has crossed over the timeline that divides earth and heaven. There is no clock or calendar in heaven. Before we know it, we’ll be joining him in the Presence of our Savior. “Blessed are the dead who die in the Lord…for they rest from their labors…” (Rev.14:13). God has taken Wally’s mortal body and given him a glorious body like his own” (Philippians 3:21a).

Heidi, many people express sorrow for your loss, but you didn’t lose Wally. You got separated from him, but you know where he is. Jesus has received Wally into his heavenly home, but He also knows your heartache and pain at having your husband torn away from you. He weeps with you just as He wept with Mary and Martha over Lazarus’ death. He’s aware that there is huge empty spot in your life now. Fifteen years ago, I faced this void: a future without my husband. At that time, I grabbed onto the awareness that “because Jesus lives, I can face tomorrow.” I can tell you after 15 years, that Jesus still comforts and strengthens the widows. He often does it through other people—like He did through Wally. You are loved, and you will not be left alone.

Having said that, If Wally were here today and could speak to this assembly, he might well say: Family and Friends, King David reminds us in 1 Samuel 20 verse 3: “There’s only one step between all of us and death.” Be ready at all times to take that step for it might come when you least expect it—just as it did for me. Then he might quote the lyrics to the old Church of God hymn by Charles Naylor, to remind us that The future lies unseen ahead…It holds I know not what;  But still I know I need not dread…For Jesus fails not. So follow Him with rejoicing;  He will safely lead you to your eternal home—as he has me.

Let’s pray: Heavenly Father, thank You for the life of my dear cousin Wally–husband, father, grandfather, brother, uncle, and friend. Thank You for his convictions and ideals, his influence and labors, and his dedication and love for Christ and his family. We rejoice to remember how he met with You each day in the pages of Your Word. Thank You that he has fought the good fight of faith and You have welcomed him to his eternal home. We commit his wife and family to your care and comfort. May they remember and cherish Wally’s life of discipleship and his love for them. Let them feel your Presence as You strengthen them by your power in the days ahead. In Jesus’ Name, we pray. Amen.

Picture Below: at Wally & Heidi’s house in Farmington Hills, Michigan, 1998. 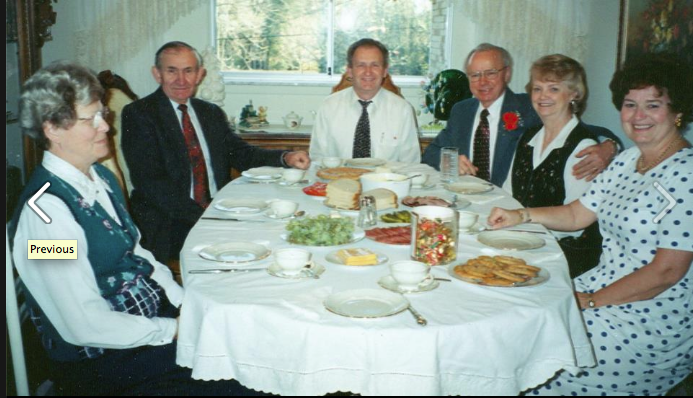 Comments by my daughter Caroline on picture above: In memory of three men who played a significant role in my life: Onkel Wally (center) who died early today (June 8, 2014) on what would have been his 71st birthday. Onkel Willi (left) who died in January 2014. And my dad (right) who died in 1999. Ich vermisse euch…  Precious in the sight of the Lord is the death of His saints – Psalm 116.15

Below: Wally’s Family the night before his Celebration of Life service. 13 June 2014